B is for Bubbles was a great process-art letter craft, but we forgot to do some lower-case b shapes! I had to rectify that as we are making some fun letter craft workbooks for the kids, so we came up with this B is for Bunny letter B craft.

Pair this with our fun Phonics Poems for even more alphabet fun!

Our B is for Bubbles letter craft could easily be adapted to work for lower-case b as well, however I didn’t think of that at the time, and while the kids enjoyed the process of painting with bubbles, I thought we should try something a bit different this time around.

“Bunny” is generally accepted as a casual word for a baby rabbit, similar to “puppy” instead of pup for a baby dog, but if you’re apprehensive about using it, go with the bubble process letter craft.

This b is for bunny craft makes a great activity on its own, or it can be used to delve into the subject of pets, farm animals, or exploring the classic children’s book, Peter Rabbit.

Watching some videos of bunnies moving around in fields would be a great way to transition from the craft to a some bunny dancing!

How to Make a B is for Bunny Letter B Craft

Using the scissors, cut the construction paper into lower case “b” shapes and make a few sets of long pointy ears.

I also liked using a contrasting color to make the “inside” of the ears (just a smaller version of the same shape). You could also add mini pompoms or small circles for the nose, and either long rectangular bits of paper or pipe cleaners for the whiskers.

Have the children assemble their letter B craft however they think looks best.

My only preference is that the letter stays properly oriented – especially with a letter craft like “b” that can be easily confused by children already with the shapes for “d”, “p” and “q.”

My kids who added the cotton tail last were less frustrated because it moved easily when accidentally brushed against as the others were making the rest of the craft, so I definitely recommend saving that piece for last if you can.

Will you be making letter crafts with your classroom?

Be sure to check out some of our other Kindergarten Letter Crafts, such as A is for Ant or C is for Corn (another craft that includes texture and fine motor skills). 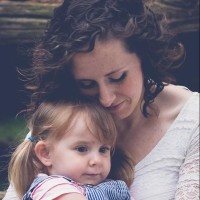 Through the Print and Play Club, her Instagram community, and easy prep classroom resources, Alex shares her love of resources and activities that promote playful learning with other Pre-K and Kindergarten teachers around the world.

Is your classroom feeling a bit crazy right now? Check out our FREE event, 5 Ways to Reset Your Classroom.